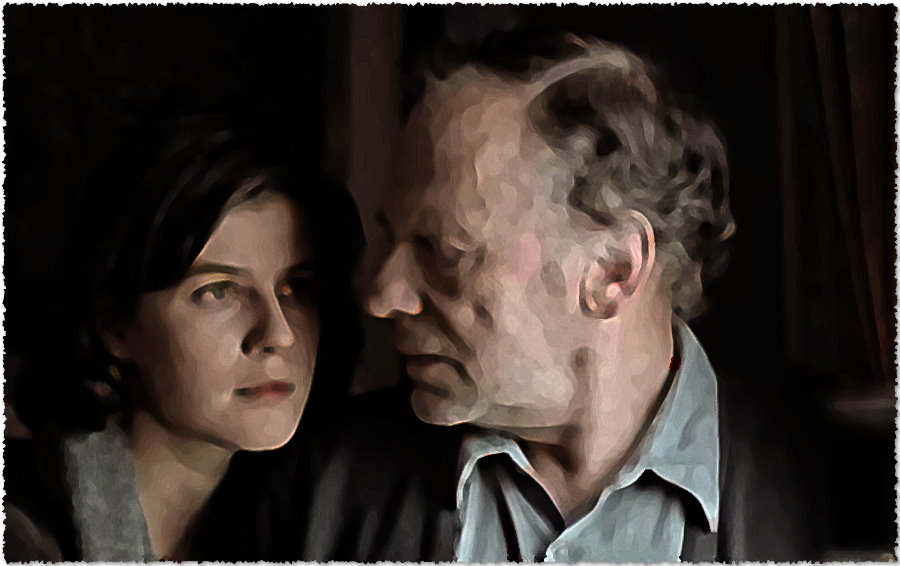 The film stars Irene Jacob as Valentine, a young model who longs for her out of reach boyfriend. We never see him—we only hear him over the phone, where he regards her indifferently. She tells him that she misses him but he responds with, ‘me too.’ Based on his coldness, he doesn’t love her but he still tells her that he might love her. ‘That’s not the same,’ she replies. One night, Valentine hits a German shepherd with her car. The dog is bleeding and the collar indicates that her name is Rita. Valentine frantically returns the dog to her owner—a reclusive, retired judge (played by Jean-Louis Trintignant). Valentine pushes herself in when he does not answer the door. Upon the news, he reacts with indifference. She then takes Rita to a vet and comes to learn that the dog is pregnant. The Judge sends Valentine payment, but he sends more than the cost of the bill. When she goes to return his money, she finds him eavesdropping on his neighbor’s conversations. Chastising him, Valentine informs him that she pities him, but he realizes that it is more disgust that she feels. ‘People have a right to their secrets,’ she says.

Much of Three Colors: Red happens over phone lines or news reports—it is as though people keep missing one another and only come to learn of each other via third parties. When Valentine hears that the Judge has been charged with invasion of privacy, he admits that he reported himself. Meantime, a handsome young law student named Auguste (played by Jean-Pierre Lorit) is infatuated with his girlfriend Karin (played by Frédérique Feder) who is cheating on him. One night, he drops his books in the street and stumbles upon a passage, which he uses to pass his exam. What if he had not dropped his books? Or if the page had not opened at that very spot? Much like Valentine and her boyfriend, Auguste regularly calls Karin and waits for her to answer. Sometimes she does. Auguste learns of her affair once night when he goes to spy on her. Distraught, he takes his anger out on his dog by slapping it away and then tying it to a pole. (He later goes to retrieve it off camera.)

Red is the color of anger and the color of fury, but it is not so much these emotions that saturate this film. The music is somber yet contains vigor. There is a passion lurking beneath the lives of these characters. As example, the Judge seems to genuinely develop a fondness for Valentine. He longs to become a better man. As the film progresses, we watch him soften. He offers her pear-flavored brandy and then buys her a bottle of her own, which is wrapped in bright red paper. Likewise, the redness within this film much resembles both Blue and White and their respective colors. Red cars, red walls, the furniture, the chair, the table where upon it resides a red apple, half eaten. Valentine poses for a photo against red background. She is told to look sideways and to appear sad. ‘Pretend you are sad.’ This photo is blown up and placed at the intersection where Auguste sees it one night and smiles.

It has been suggested that he and Valentine might make a good couple, if only they could chance upon one another. We witness them several times in the same place, only to never meet. In this sense, we become the universal eye watching from afar, judging. ‘If only they could get closer.’ After all, how did Valentine meet the Judge? What if Rita had not gotten out and Valentine had not been driving that night? The Judge informs Valentine of a dream he’s had. In it, she appears older and is happy. He sees possibility in her. ‘I’d like one of Rita’s puppies once I get back,’ she informs. Planning to take a ferry across the English Channel, this becomes a major moment within the trilogy. A storm is approaching and the ferry capsizes, thus resulting in a major loss of life. There are only seven survivors, with many passengers still missing, the news report says. Among them include Julie Vignon, the widow of a French composer who died last year, an English barman, a Polish businessman named Karol Karol, Dominique Vidal, a French citizen, Frenchman Oliver Benoit, and two Swiss citizens named Auguste Bruner, judge and a model and student named Valentine Dussaut. While this is unfolding, the Judge watches the screen. Concern fills his face, and then relief overtakes. She is safe. Valentine turns her head to the side—she is sad and we get her glimpse in profile. Similar to the pose from her photo shoot, this time her sadness is real. She need not pretend.

This final scene is the only time we witness all the main characters together. Brought about by tragedy, there’d be no other way for them to chance upon one another. In all three films, there is a green glass dispenser that by passers by struggle to fill. Awkwardly placing their bottles within the slot, very much like life, these moments are difficult to forget. Oftentimes we don’t recall something unless we see it more than once. Same can go for people. I can’t tell you how often when I worked retail; a customer could return later that day that I may not remember. ‘I’m back!’ this person would say. Meanwhile, I’d have not a clue that I’d seen them before. It was only those that kept recurring that I was able to successfully recall. Likewise, might any of them recognize me were I just some stranger on the street?

Kieślowski is most clever in his rendering of these moments within memory. Our times on this earth are ultimately reduced to recollection, once we are gone. And how easily it would be to have another life happen, where we might chance upon an earlier version of ourselves awaiting some other fate. Three Colors: Red is a very intricate undertaking of feelings and events. We watch the reclusive Judge thaw towards life and love, wherein he has come to genuinely care for another. (Including affectionately caring for Rita’s seven puppies—coincidentally the same number of survivors.) Intention or coincidence is all we can ever wonder. Of all three films, Red holds the most power. Hope. We see a glimpse of this hope at the end of Blue via Julie’s smile. White, comedy aside, is the bleakest. Yet Red, despite this tragic loss of life that occurs, Red fills our world with possibility—that there will be a future dream where we too find ourselves happy. Like Valentine, our emotion—whatever it might be, will be real and we will need not pretend.

If you enjoyed this review of Krzysztof Kieślowski’s Three Colors: Red, check out the automachination YouTube channel and the ArtiFact Podcast. Recent episodes include a dissection of Kurt Vonnegut’s classic novel, Galapagos, a philosophical look at kitsch, aesthetics, and NFTs with UK painter Ethan Pinch, and a long discussion of photography from Alfred Stieglitz to Fan Ho and Vivian Maier.