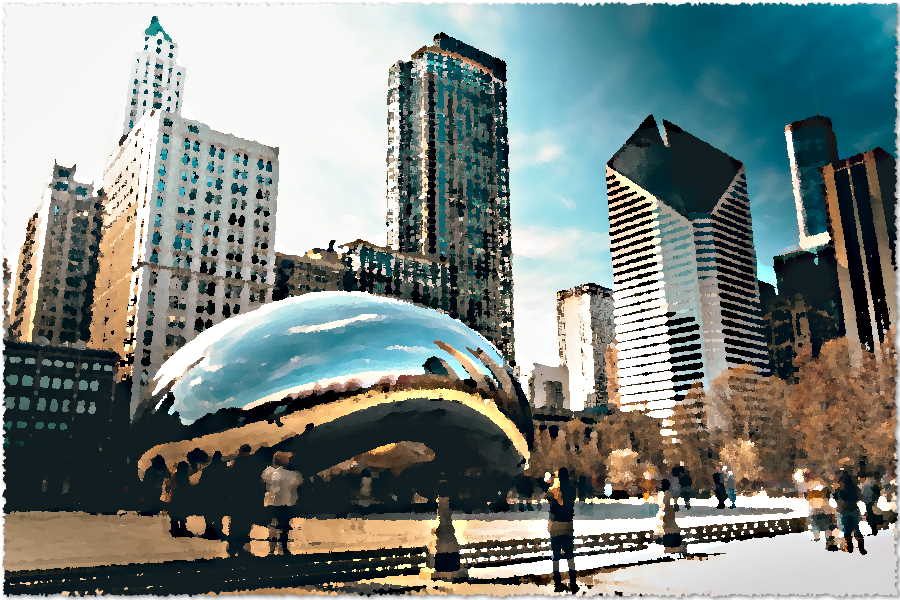 The element of crime is also prevalent. “And they tell me you are crooked and I answer: Yes, it is true I have seen the gunman kill and go free to kill again.” There is a sense of lawlessness and lack of order or justice. That is what Sandburg focuses on. The poem precedes Al Capone but we can see him coming.

And there is the poverty, “On the faces of women and children I have seen the marks of wanton hunger.” People went hungry back then especially in Chicago. Carl Sandburg spares no words in describing Chicago as a stark place.

But that’s where the poem turns a different direction. Sandburg has seen the sneers in reaction to the city but claims the city proudly sings. The city may well be coarse, but that is the price of being alive. The city may be cunning, but it is strong. Other cities are soft and little. It’s “fierce as any dog with tongue lapping for action.” It’s “savage pitted against the wilderness.” Chicago has “dust all over his mouth” yet “laughs with white teeth.” The city laughs and laughs like a fighter who has never lost a battle with brawling laughter. It is “proud to be Hog Butcher, Tool Maker, Stacker of Wheat, Player with Railroads and Freight Handler to the Nation.”

So why would I want to live there?

The city is not for the faint of heart, but it offers a place to take pride in. If you’re interested in action it’s got that. If you want to flex your muscles Chicago is the place to be. If you are a union man, Chicago is for you. Choosing to live in Carl Sandburg’s Chicago is no longer an option, but it is interesting to be acquainted with it.

It is a city you take on. You must fight to survive. The violence is uncontrolled. The only thing missing from the poem is the alcohol. Prohibition was right around the corner. But you won’t need any fire water in this town to have a flame. If you place yourself here, you must be ready or resigned.

The energy of Chicago is riveting like a wrestling match. It doesn’t let up. There’s no reflection; it is raw. The words pound on your heart like a hammer. It’s almost Godless unless we’re talking Old Testament. There is nothing kind about it and nothing merciful. The welcome mat is not out. You want to take cover but you can’t.

So was this the way other people saw Chicago back in 1914? I would say Sandburg has gone extreme. Life undoubtedly had its harshness for some people and that’s where Sandburg laid his focus. Knowing my grandparents who were growing up around that time, I’m guessing that’s just the way life was. Maybe if you had riches it was gentler, but maybe not.

As we know, Chicago hasn’t gotten much kinder. But we lack a Sandburg to sing praises of the rough. Have people gotten soft? That’s probably not it. People have been disappointed. Gone is that awe of material wealth because these days it’s become hoarded. It’s hard to be flashy when all you seem to do is pay bills. Instead of a feel of action, it’s a feel of dread. The violence has increased and gone virtually unchecked.

Could we have seen it coming? Sandburg may not have been able to predict to what his brazen city would come to. There is no mention of joy in Chicago nor is there much to be found there these days. It may not be all of that. I’m sure some people are contented, but not the type of people Sandburg wrote about. The advancement of women may have rounded the shoulders of Chicago, but it hasn’t solved Chicago’s problems.

In that regard Chicago may have taught us something. The city has always been a rough place to be. Maybe we need to be a little more like Sandburg and look for something positive to say. If that’s still possible. It’s a call to poets to strengthen themselves. Sandburg’s poem is very physical. Sometimes it just feels good to exert energy if it’s directed in the right way. Assertiveness is a start, but I feel there is a real need for justice. People need to speak their minds freely rather than be stifled by dirty looks whenever they express displeasure.

In Sandburg’s Chicago brisk business ruled. Maybe we have to give more people opportunities to engage in business. Do I hear a sharing of the wealth? More and more people are talking about it. In Sandburg’s time people just did without. Do we really want his Chicago? Can we use the poem as a springboard to create something better? Yet, there will always be hard times. The real gift of Chicago is the recognition that we can still have our pride.

If you enjoyed this review of Carl Sandburg’s “Chicago”, consider supporting us and get patron-only content on our Patreon page. This will help the growth of this site, the automachination YouTube channel, and the ArtiFact Podcast. Recent episodes include a survey of photography from Josef Sudek to Laura Makabresku, an examination of Abstract Expressionism as depicted in Kurt Vonnegut’s Bluebeard, and a discussion of Hermann Hesse’s classic novel, Steppenwolf.

More from Bruce Ario: Today’s Anthem: Dylan Thomas’s “Do Not Go Gentle Into That Good Night”, Only Two Roads? On Robert Frost’s “The Road Not Taken”, Small Group Process: The George Fairweather Way