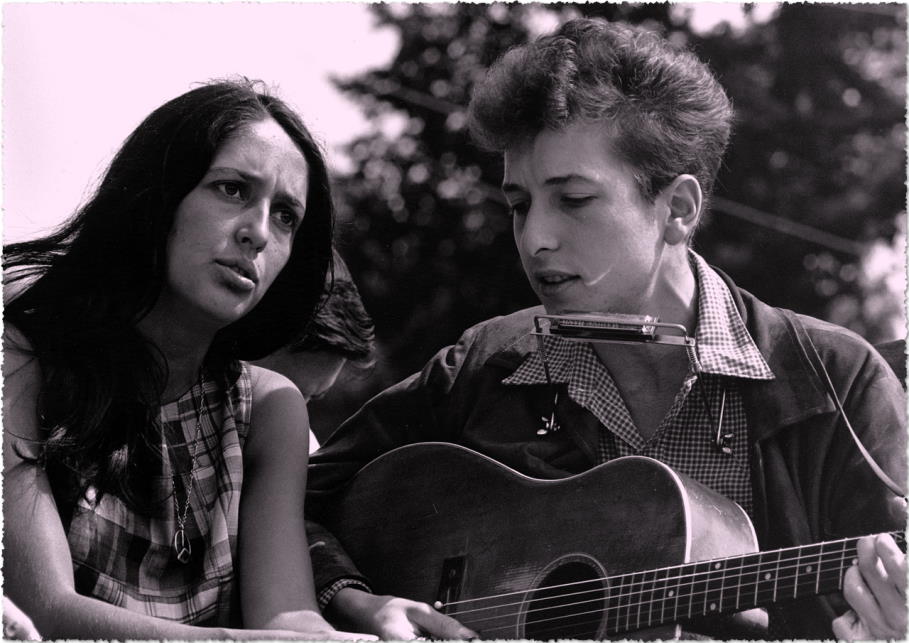 He positioned himself into the spotlight with the anthem Blowin’ in the Wind. Although it’s truly laudatory in its own right, Dylan needed the help of Peter, Paul, and Mary to popularize it. Soon it was adopted as a theme song for the Left. But why? Dylan claims he never intended that. Instead it was only a song that he wrote in ten minutes according to him. Why the greatness associated with it? Let’s take a look.

How many roads must a man walk down
Before you call him a man?

Yet Blowin’ in the Wind is claimed by the Left who relate it the most to the struggle and breadth of their battles. Dylan may well have intended it for everybody, but it found a home with the Left. The nature of the song was to ponder loosely defined questions that could never be answered easily but ones which everyone could consider. We are all on a road in our lives. Dylan saw many roads. The nature of the song is not limited in the way the Left accepted it.  All of the song’s lyrics asked universal questions. Indeed, the CEO of General Motors could relate.

How many seas must a white dove sail
Before she sleeps in the sand?

It even includes animals. It is a big song.

Blowin’ in the Wind is at once a plea for compassion as well as a response to the answerless questions of our hearts and minds. It gets to all the “why’s” of life. We are like the two-year-old asking why except that we’ve been on the road a lot longer, and we still don’t know. This doesn’t keep us from asking, however. Is asking the whole point of life? Do we just continue asking, with no hope of an answer?

Dylan says there is an answer, but it’s elusive and blowing in the wind. We don’t have a multiple-choice test with one simple answer; this is an essay question. It’s not a cynical, hopeless song. There is an answer to all our longings but it’s like wind – changing, invisible, and fleeting. In the same way the wind is limitless so are our answers. You may have an answer to a question, just like you might have a tornado, but the wind is not limited to that solitary event and neither are the answers.

If you look at the lyrics of the song, you’ll see there are many questions. Dylan is showing us there are no bounds to the number of questions despite the song having an ending. He’s opening our minds to the infinite nature of the matter at hand. We can each insert our own questions.

It is a very big song at the start of a very big career. Later in his story, we can see how Dylan continues to ask questions and how he continues to answer them. And there is a walking down of many roads. In answer to his question, how many roads, Dylan has traversed more than the average person.  Then, we can acknowledge a kind of answer to it all. I Contain Multitudes comes to us in the latter part of Dylan’s life.

Once again the largeness of scope. He doesn’t say he contains everything which no one could truthfully say, but that he has multitudes which is a way of saying big. He has become that man that he hypothesized in the first song. In the latest song, Dylan has resigned himself to his many limitations. But grudgingly. He is not euphoric, but cranky. No longer is he finding his answers in the wind. He has answered many of his questions throughout a lengthy and prodding process. And he gives us his answers, a risky and brave thing to do. He has become too big to fail. Has he come to his end? Not really: he contains multitudes. He has not run into dead ends, but has found the pot of gold. Admittedly, his zest for the road has weathered. He cannot, nor does he choose, to deny aging. His answers aren’t blowing in the wind. He lists concrete images of what he has now and how he spends his time. I Contain Multitudes is where he has arrived. Life’s been struggle and a search and a quest, but he has answered the call in a big way. He’s on the mountain top now. He’s not asking but instead calling the shots. It might seem too neat a package to be worthy of an artist. But it’s not really neat at all; it’s just big.

If you enjoyed this piece, check out the automachination YouTube channel and the ArtiFact Podcast.