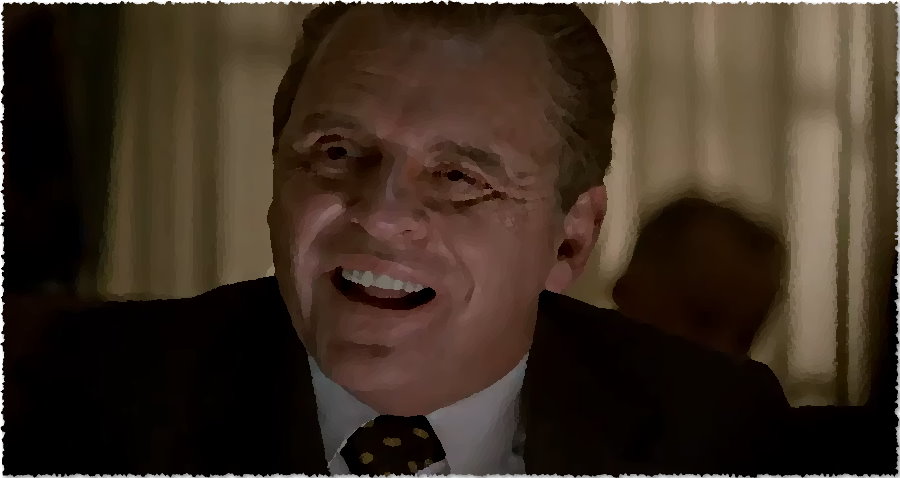 Safe to say, I am not the intended audience for Oliver Stone’s film, “Nixon”. Though I knew brief details of Watergate, bits and pieces of the president’s trajectory into villain of the American political mythos, he amounted to little more than an encyclopaedia entry to me. Stone’s film deals with much of that historical detritus. Nixon sits in conference with talking heads. They spew out names and schemes that whizz by, ephemeralia of the moment. What concerns me is the undercurrent: the way actor Anthony Hopkins poses in his power, fidgety, immersed. It is clearly what Stone’s Nixon lives for, despite the paranoia, the humiliation and gradual distancing of all that holds him close. Oceans away, I recognize that intensity, man’s love for his own show. I see that love within the personages of my own environs. In art, it turns out, the unintended audience is more important.

The subject of “Nixon” is the national illusion: what plays in the minds of the American public, and what grifters give to be a part of it. The very first shot, of a black & white training film with a manager instructing a younger salesman, hints at this: “…you have to remember what you’re really selling: yourself.” It’s revealed that the training film is being projected in a conference room, watched by the Watergate burglars as they prepare for their break-in. The projector’s lens sweeps across the frame, aims directly at us. The title, ‘Nixon’, materializes. The burglars leave, and we’re left with the manager’s monochrome smile on screen. He looks like a doppelganger of the real Richard Nixon. “Nothing sells like sincerity” he tells us.

‘Sincerity’ – that’s the joke, because no frame can be pinned to a sincere truth. There’s always a perspective, or multiple, to take into account. Much of the film is framed within a post-Watergate Nixon listening to old tapes in the White House. He hears the voices, floats into flashback, but we are never really sure whose dream we are within. Oliver Stone loves to leaven fiction with historical footage. Sometimes he mixes the two in faux newsreel depicting the Hopkins Nixon. As images fracture and proliferate, so too does our view of the president. Roger Ebert, in his own review, compares the film to “Citizen Kane”. To me, the better Orson Welles comparison is “F for Fake”.

Through tapes and flashback, we see Nixon’s life nonlinearly. We see it blown-up, mythicized, enmeshed in motifs of sentimental Americana, though we, and Oliver Stone, know better. Take Nixon’s childhood in Whittier, for example. Hannah Nixon, mother of the president, whom the real Richard Nixon described as a “Quaker saint”, appears as such in the film. She speaks with a Quaker’s ‘thees’ and ‘thous’, chastising Nixon’s misdeeds (notably, lying) with firmness: “Remember, I see into thy soul. Thee may fool the world, even thy father, but not me, Richard. Never me.” We see her later, interviewed before her death in 1967. When asked if her son would make a great president, her answer gives no indication of her honest feelings: “If he’s on God’s side, yes.”

But, if there is a God, it would not be a He, Oliver Stone seems to say, for the temptations and evils that befall the president are ultimately those concerning power and machismo. Through much of the film, men impinge themselves upon Nixon: Texan businessmen, directors of intelligence agencies, even communist bloc leaders. These personages flock around him like envoys of sin, seeking to use him as a pawn in their machinations, while he in turn seeks their use. They take on an archetypal, exaggerated quality, spouting cryptic statements that puts them closer to James Bond villains than full-fledged characters. CIA director Dick Helms recites Yeats’ “The Second Coming”, while Mao Zedong offers pithy philosophical ruminations as Chinese characters flash on screen. Such campiness would be overdone in any other film. Here, they play well with the public mythos of deep state conspiracies while allowing grander poetic commentary. The system is a “wild animal”, the posit is made, and men form its appendages. Men drag men into their games, wreck everyone below. Nixon’s struggle is whether to play, or quit.

“We are both from poor families and others pay to feed the hunger in us.” These words from the fictional Mao get at it. Nixon’s lust for approbation leads to consequences all the way down, for his own family, and for America. The agitprop he delivers in presidential speeches is juxtaposed against footage of the violence wrought within his term. But Nixon cares more about the image of Nixon. He wishes to stand amongst the throng of past presidents that hover above in distanced portraiture. In a scene where he justifies war in Cambodia to his cadre, he invokes ghosts: “Bold moves make history, like Teddy Roosevelt rushing up San Juan Hill.” As he speaks, in frame, a painted founding father overlooks him. In hindsight, Nixon is the mirror to America in a far realer, human manner than these ideals. When he meets student protestors at the Lincoln Memorial, in a later scene, they are puzzled by this man who seems too confused, so different from what they know from television, who mumbles excuses before Lincoln’s statue and is removed by those in black suits.

Only Pat, Nixon’s wife, seems to touch upon the inner Nixon. She sees through his self-pitying sentimentality, knows his weakness. “We can be happy.” – so much of her tries to convince him of that paradox: that the most powerful man in the world remains unfulfilled, but fulfilment lies outside of power. We sense she is the only beautiful thing in his life. Beautiful enough that the action of greatest moral integrity he commits comes from his rejection of a showgirl’s advances at a Studebaker show. Nor is he ever shown to be unfaithful on screen. This creates stronger pathos than adulterous melodrama could: that they could be happy seems less wish than fact, if only he would give up his games, schemes, and facades. Yet he is unable to stand up to her scrutiny, or anyone’s, really, for he cannot shake his war within.

One of the film’s most profound moments comes when Nixon faces a portrait of Lincoln in a room full of shadows. He ponders the deaths that allowed him his position: two pairs of brothers, his own and the Kennedys. “Where would we be without death?” he queries. The founding of America was made upon corpses, that’s one way to interpret it. Another is that to stand in power requires a death of self, the same way Nixon was whittled into his image, for the animal needs an image to latch onto. Unexpectedly then, despite the deceptively despairing tone, the film’s ending really is a positive one. After Watergate, Nixon resigns from his role as president, regains a bit of self. He admits himself to an uncertain future as he walks into the darkness with Pat by his side. Credits roll over his sentimental farewell speech, given stronger heft through memory of the film. The American political machine may lockstep itself into worse and worse entanglements, but Nixon is out of the picture.

Anthony Hopkins looks nothing like Richard Nixon. They are apart in the shape of their face and the power of their eyes. In a way, Oliver Stone engineered the greatest comeuppance Nixon could receive: the president too paranoid about how he would appear to the world slain by his illusion. I, too, have made that image mine. The America in me belongs to no exterior reality. The Nixon in me is much the same.

If you enjoyed this review of Oliver Stone’s “Nixon”, consider supporting us and get patron-only content on our Patreon page. This will help the growth of this site, the automachination YouTube channel, and the ArtiFact Podcast. Recent episodes include a discussion of Ryusuke Hamaguchi’s “Asako I & II” and “Drive My Car”, a catalogue of Elon Musk’s stupidest claims, and a critique of James Cameron’s Terminator films.

More from Chin Jian Xiong: Great Man Out Of Time: On Dan Schneider’s “A Notch Of Eternity”, Mere Reaction: Why Chris Ware’s “Rusty Brown” Fails, Facts of a Face: on Janet Lewis’s “The Wife of Martin Guerre”