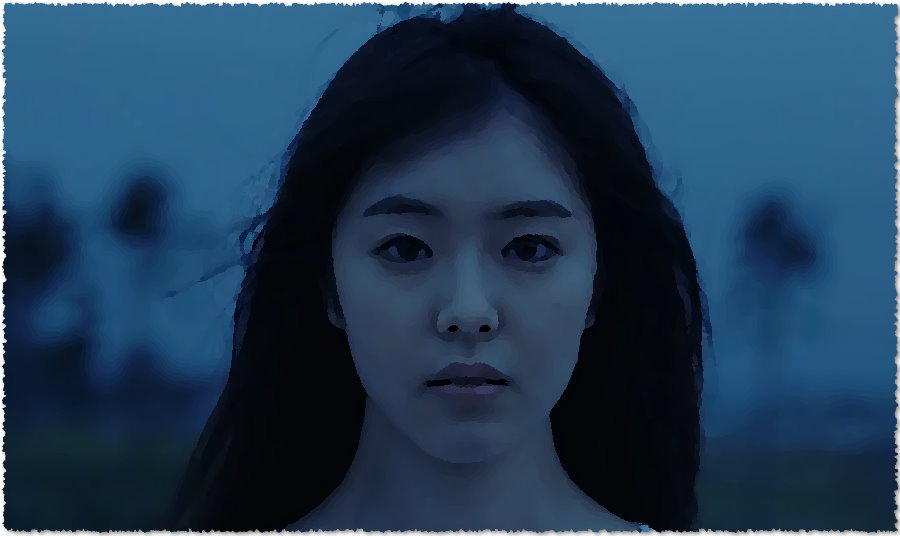 [If you’d like to watch our discussion of Ryusuke Hamaguchi’s Asako I & II and Drive My Car, ArtiFact #31 can be found here.]

Stillness, aesthetic rest, relaxed pacing, static, almost banal, framing – these are all words you can use to describe Ryusuke Hamaguchi’s 2018 film Asako I & II. It is a solidly built thing, in terms of its structure (you are never lost or confused as to what is happening), but composure can be deceiving. What might be construed as elegance, an aesthetic serenity, is really just detached posing, a pretty exterior that mirrors the elfin perfection of the film’s protagonist, Asako – and just as empty, within.

Although, I admit: it’s an impressive feat to string a nigh-two hour affair upon prettiness alone (or for the most part) but Hamaguchi and Erika Karata, who plays Asako, nearly pull it off. After all, it is not Karata’s acting doing any heavy lifting, as she is asked to perform with all the complexity of a porcelain doll. Instead, much of the film’s watchability (and it is a far more watchable film than Hamaguchi’s later ponderous effort Drive My Car) stems from Masahiro Higashide in his double-role of Baku/Ryohei, as well as the supporting cast who come off as more interesting/vibrant personalities than Asako.

But then, isn’t that the point? Throughout the film, Asako is shown time and again to be a rather vacuous individual, incapable of personal growth, only gaining definition/purpose around greater lights, like Baku/Ryohei. The film begins with a meet-cute of perfunctory speed: Asako loiters in an art exhibition, where she is charmed by a lanky, laconic big-haired DJ named Baku. She stalks him, throwing doe-eyes, until they meet outside the museum where, quite literally, sparks fly between them. Baku wordlessly crosses the gap and plants a kiss on her, and the romance (if one can call it that) commences.

There is little about Baku, apart from good looks and a brash, bodily possessiveness, that seems to call for any devotion. Yet, Asako is mindlessly devoted to him, in spite of her best friend’s cautioning in which she warns her that a guy like him will get bored and dump her, eventually. This, of course, bodes true, for Asako is indeed abandoned when Baku goes out to get bread and never returns.

Two years later, Asako meets a young man who bears a striking physical resemblance to Baku: Ryohei, an advertising lackey working next door to Asako’s coffee shop job. If Baku is the handsome and brooding type, who loves at a lofty distance, Ryohei is the classic Nice Guy, who wears his heart on his sleeve and makes up for any lack of “sex appeal” with emotional dependability.

They fall in love, but Asako can’t quite rid herself of Baku’s memory – especially when she discovers that he’s become a celebrity actor. One hardly believes her protestations when her friends suggest her attraction to Ryohei stems primarily from his likeness to Baku. This is confirmed when she hears that Baku is in town (where Asako and Ryohei have moved in together) and she unhesitatingly rushes to meet him; never meeting face-to-face but longingly waving at his car as he’s shepherded away from adoring fans.

At this point, there’s little doubt that, in Asako’s mind, Ryohei is simply an extremely convenient replacement for What Should’ve Been with Baku – so, when out of the blue, Baku shows up to whisk Asako away, she hurriedly capitulates, to the humiliation of Ryohei and their friends.

Baku is still his laconic, uber-relaxed self, despite a cosmetic change, and after he takes Asako (who seems to be waffling again) to the sea, she predictably changes her mind and runs back to Ryohei. Baku is unaffected, but Ryohei is understandably infuriated. One is pretty much on his side as he rebuffs Asako’s pathetic attempts to revive their union, even lying about giving away her cat, whom she’d abandoned to Ryohei in her flight with Baku.

Of course, he capitulates to her pleas, and the film ends with the two of them back together in their old apartment, Ryohei insisting that he will never trust her again. They survey a river in a wintry landscape, and the exchange has all the subtlety of a Mike Tyson body shot:

RYOHEI: What a filthy river.

One interpretation of this excruciating thud of an ending is the “filthy” actions of Asako (emotional infidelity, abandonment of a loving partner) in contrast to her physical beauty; or, on a deeper level, this points to Asako’s inability to see past the superficial, as she discards an obviously healthy relationship with Ryohei for an old-flame-turned-celebrity, so deluded is she that everything will simply revert to the way it was.

Well, what more can be said about the film? Perhaps it’s strongest aspect is its portrayal of a completely static personality: Asako is young, beautiful, and genteel, but there seems to be a great emptiness inside her. She has no passions, no deep interests, no core to her person that’s unaffiliated with her friend group. It’s as if she cannot bear to live with herself, so she keeps filling her life with stock characters.

For example, in the film’s first quarter, Asako’s friend in Osaka is the extroverted and forward Haruyo (Sairi Ito). Asako, Haruyo, Baku, and Baku’s landlord/distant relative Okazaki (Daichi Watanabe) eventually form a foursome, which disbands when Baku vanishes and Asako moves to Tokyo. Two years later in Tokyo, Asako’s friend is extroverted and artistic Maya (Rio Yamashita). Eventually, a foursome is formed consisting of Asako, Ryohei, Maya, and Kushihashe (Koji Seto), a co-worker of Ryohei’s at the sake company. Yes, the particulars differ, but the pattern remains – with the doppelganger plot device of Baku/Ryohei being the overt manifestation of Asako’s failure to fundamentally change.

But considering how much time is spent, and how little is actually essayed, did this really need to be 119 minutes long? The majority of the film is concerned with the rather banal growth of Asako and Ryohei’s relationship – and I’m sure it’s not just me who started to feel more and more manipulated (and cheaply, at that) as Ryohei is shown time and again to be the Perfect Boyfriend while Asako makes her cute little faces, waffling all the while. Yes, I was aggrieved by Asako’s rash decision to run away with Baku, which I’m sure was intentional, but surely Hamaguchi ought to leave some room for empathy by making her thought process clearer/more understandable. But no, what we’re left with is a cipher, and as an online reviewer I read correctly claims, what little good will built up for said cipher is dashed against the wall by the end.

Speaking of reviews, the film certainly got its fair share of positive ratings in the wake of its Cannes premiere, but the overall reception seems more on the mark, especially compared to Hamaguchi’s virtual coronation into the pantheon of contemporary auteurs for Drive My Car. A lot of the big-name publications gave it light, somewhat tepid praise, as if afraid to call it out for being an outright mediocrity, while others had no such qualms, like this too-short but hilarious (and spot-on, mostly, especially with its point about all the side characters being more compelling than the two leads) review from Datebook.

This is my second Hamaguchi sampling, and so far, I haven’t been very impressed. I opened this review by name-dropping the old Japanese Masters, but what Asako I & II most reminded me of was some sappy slice-of-life anime feature. Think the Makoto Shinkai films (and yes, this probably isn’t the best comparison, as I’m not really up on my anime these days): gorgeous, on an aesthetic level, and engaging plot-wise, but exceedingly juvenile in their foci. Except, in this case, there isn’t any smooth animation to ooh and aah at, and where the Shinkai films can get one’s adolescent heart soaring with its pulpy genre plots and melodramatic swells, Asako I & II just sort of sits there like its titular character – banally ambivalent, dully enigmatic, and damn near expressionless.

If you enjoyed this review of Ryusuke Hamaguchi’s “Asako I & II”, consider supporting us and get patron-only content on our Patreon page. This will help the growth of this site, the automachination YouTube channel, and the ArtiFact Podcast. Recent episodes include a discussion of Ryusuke Hamaguchi’s “Asako I & II” and “Drive My Car”, a catalogue of Elon Musk’s stupidest claims, and a breakdown of abortion, Roe v. Wade, and the Constitution.