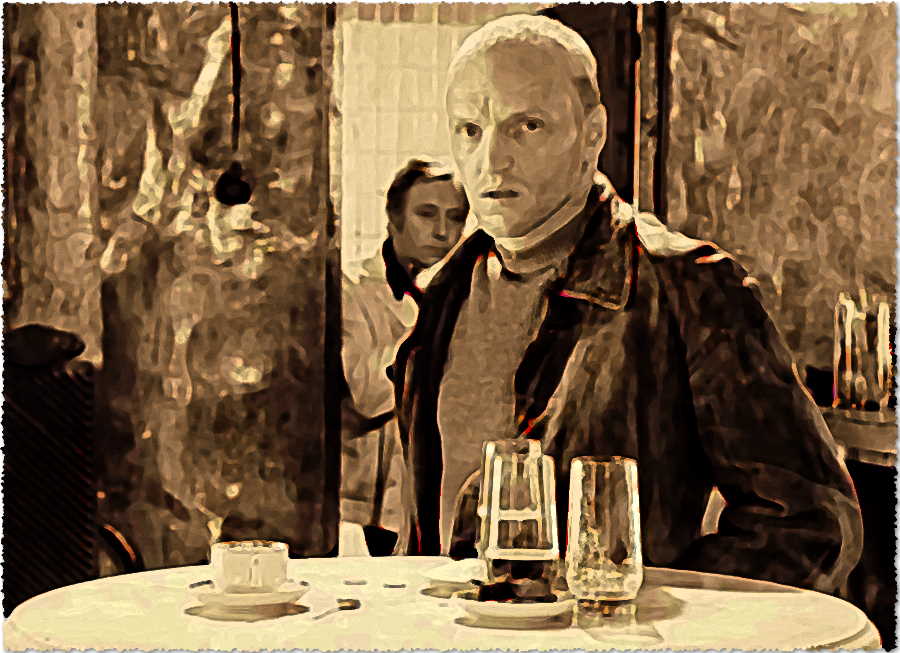 The story, shot in long, dreamlike sequences, is meant to immerse one into a sort of dream. (I often thought that watching a Tarkovsky film is the closest to observing dream.) The film, set in an unknown country in an unknown time, begins with a journey involving unnamed citizens. Stalker, Writer and Professor are the titles distinguishing these three figures who, in their search through the Zone (a site supposedly loaded with traps) contains a Room where one can wish for their secret desires to come true. The anonymity of the characters serves a purpose—that this could be any one of us. And what of the Zone? How do we interpret this place that is ever so difficult to navigate? Here, weeds are overgrown (according to human standards, anyway) and the flowers hold no scent. When the Writer is asked what he writes about, ‘My readers,’ he replies.

Within the Zone, these humans are helpless—forced below the brunt of nature. In one particular scene, the Stalker lowers himself into the overgrown green. Seemingly, he drops into the earth and rolls within the vegetation, only to then look up and engage in conversation with the Professor. A small insect delicately traverses his finger. ‘You’ve brought many people here,’ the Professor says. ‘Not as many as I would like,’ the Stalker replies. When asked if he would ever use the Room for himself, the Stalker insists that he is fine as is. Then, in a moment of memory or imagined flashback, we see him (in sepia coloring) in a fetal position within a canal. A black dog approaches, whom we witness a number of times. In one of the most haunting scenes, the dog sits alone on a slab of concrete amid the untamed vegetation. The dog then stands without any hint of command. It clearly is tamer than the weeds that surround.

The Stalker warns that the Zone is filled with traps. He and his two companions attempt to detonate any potential dangers by tossing small cloths tied to metal rings. For much of the Zone, the land is damp and murky, whilst chemical-filled waters grow impassible—too difficult to navigate. Much like the artist who is forced to navigate a world of social climbers, attention-seekers and corporate parasites, he will inevitably feel that he does not belong. ‘A man writes because he is tormented. Because he doubts,’ the Stalker says. ‘He needs to constantly prove himself…that he is worth something.’ Tarkovsky once said that he believed The Book of Revelation to be the most beautiful piece of writing ever written. Then, in a slow, child’s whisper, we hear the Biblical words accompany a long flow of imagery. We could be either above or below the waterline. (Are those trees reflected from above or are we witnessing them from below? Mechanical debris lingers from a bygone time.) Within the Zone, nature is indifferent and it contains its own form of beautiful. Much like looking at images following the 1986 Chernobyl disaster, amid the chemical disease, apples still grow from trees. This is the world without human intrusion.

I sometimes wonder if humans are only as worthy as memory. As noted in Tarkovsky’s 1975 film Mirror, it is not what one remembers but how one remembers that matters. The men discuss a previous Stalker named Porcupine who led his brother through the Zone, which resulted in his brother’s death. Then, upon arriving at the Room, he was bestowed with a large sum of money (his secret wish) rather than bringing his brother back. Guilt ridden, this resulted in his suicide. An argument among the three men ensues, wherein the notion that the Room could be used for evil is addressed and does anyone know his secret desires? ‘Weakness is a great thing, and strength is nothing,’ the Stalker mentions. ‘When a man is just born, he is weak and flexible. When he dies, he is hard and insensitive. When a tree is growing, it’s tender and pliant. But when it’s dry and hard, it dies. Hardness and strength are death’s companions…’ Or in other words, to think one knows all the answers, that he is indestructible, is to become ossified both in body and mind.

The three men come to realize that there is ‘no happiness to be found here,’ and hence they abandon the mission. Yet one must ask, ‘Were they really in search of it?’ It was Tarkovsky himself who said that the world wasn’t created for man’s happiness, but rather, ‘We are here to fight, so that good and evil can clash within us.’ I have often believed that my best work was created whilst I was most unhappy, and that it is this unhappiness that causes my conflict within. (After all, without conflict there is no drama and without drama there is no narrative.) Perhaps the success of creation is enough of a reward itself, but I, much like the characters within Stalker, will still long for this happiness, nonetheless.

‘Tarkovsky shot Stalker in and around the Estonian capital of Tallinn, a city with a long history of invasion and occupation,’ according to the BFI. Abandoned power plants and neglected industry fill this city as the men traverse it. Around, the Zone contains them as future civilization falls away. Andrei Tarkovsky died in 1986 at the age of 54 due to cancer. It has been suggested that he succumbed to poisoning whilst filming Stalker, as both his wife (Larisa Tarkovskaya) and Anatoly Solonitsyn (Writer) all succumbed to the same cancer.

Stalker is not sad, but it is melancholic. It is not idyllic. We witness these characters in their suffering (including the Stalker’s wife who drops to the floor in a mess of tears upon his departure) as well as their longing. We witness the Stalker’s telekinetic daughter. What results from their journey into the deeps of the Zone? The unobservant would say nothing. But I argue that they come to realize that one’s desire, that one’s happiness cannot be obtained simply by wish. The result would be too nebulous. In one scene, the Writer lifts himself from a puddle and sits on a large, open metal rim. He drops in a stone that takes a time before sound hits. It reverberates. ‘There is no such thing as facts,’ he says. Facts, after all, make one’s mind rigid, hard. They can obstruct creativity. Instead, for the artist, one’s mind must bend and be fluid. There is no single answer.

If you enjoyed this review of Andrei Tarkovsky’s Stalker, consider supporting us and get patron-only content on our Patreon page. This will help the growth of this site, the automachination YouTube channel, and the ArtiFact Podcast. Recent episodes include a survey of photography from Josef Sudek to Laura Makabresku, an examination of Abstract Expressionism as depicted in Kurt Vonnegut’s Bluebeard, and a discussion of Hermann Hesse’s classic novel, Steppenwolf.

More from Jessica Schneider: An Initiation: On “I Burned at the Feast: Selected Poems of Arseny Tarkovsky”, Life, Death & Romance: Joseph L. Mankiewicz’s “The Ghost and Mrs. Muir” (1947), Her Identity of Place: On Greta Gerwig’s “Lady Bird” (2017)