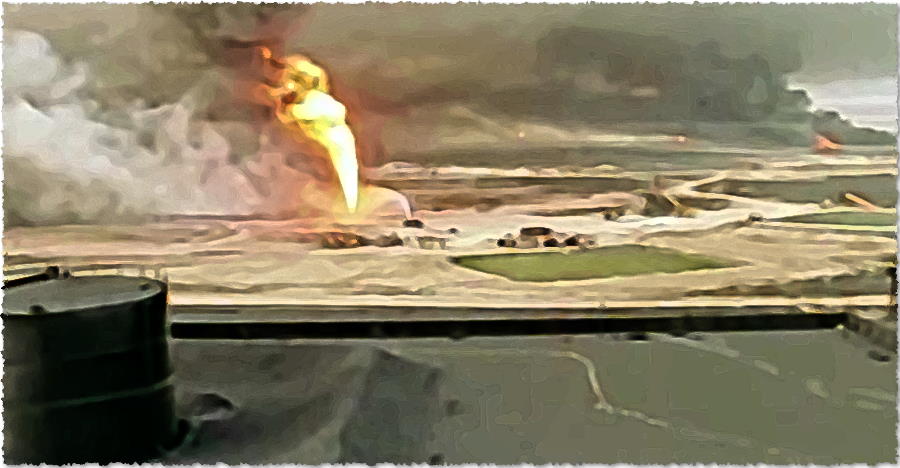 The first few seconds of Werner Herzog’s Lessons of Darkness provide a key to understanding the filmmaker’s approach. The picture opens with an excellent quote: “The collapse of the stellar universe will occur – like creation – in grandiose splendor.” The quote is attributed to Blaise Pascal, but a bit of research shows Herzog actually wrote it. In this manner, the artist seems to fill the role of an illusionist, as facts do not seem as important to him as playing with the audience’s perceptions. One could argue that all artists are illusionists because, in correspondence with the old saying, art is a lie that tells the truth, but what makes Herzog unique is that he seems hyper-aware of his nature. Throughout the film, Herzog’s narration frames the oil fields of post-Gulf War Kuwait from an almost alien perspective, prompting the viewers to honestly examine what is shown instead of simply projecting their biases. While a lesser filmmaker would tackle this film’s delicate subject in a clear-cut and sentimental manner, Herzog commits to showing the horrors of the setting in a more nuanced light. In his work, the ravaged land resembles a strange underworld, and the motivations of its oil workers remain mystifying. Herzog’s interest lies not in recreating reality, as it does with most filmmakers, but in reframing it, or even creating his own, to deliver insight.

After the epigraph, we hear Herzog’s voiceover while notes from Wagner’s Das Rheingold play in the background. Far away, an oil worker seems to signal to the audience a kind of warning, before the title of the film’s first chapter appears. There is an operatic quality to the sequence, which extends through Lessons of Darkness. This stylistic choice might have been why the crowd at the film’s premiere accused Herzog of glorifying the war. This is a misreading, as later it becomes clear the filmmaker does not shy away from showing the damage caused by  bloodshed, but it is proof of the challenging nature of his work. Herzog has no issue “interviewing” a woman who has lost the ability to articulate sentences after witnessing her sons being tortured, thus delving into the most harrowing consequences of the war. However, one cannot deny a sense of spectacle in his aerial shots of flaming streams of oil, very much in agreement with the “grandiose splendor” mentioned in the film’s epigraph. Herzog’s vision is not black or white, encompassing both the terror and spectacle of destruction.

In 1999, Werner Herzog released a manifesto titled “Minnesota Declaration: Truth and Fact in Documentary Cinema”, which delved into his concept of “ecstatic truth”: a “deeper strata of truth” which is “mysterious and elusive, and can be reached only through fabrication and imagination and stylization.” It is no wonder that this manifesto is also subtitled “Lessons of Darkness”, as this film exemplifies Herzog’s search for “ecstatic truth” more than any other entry in his oeuvre. Lessons of Darkness forces filmgoers to examine well-known images through new lenses, but, more importantly, it forces them to reassess how they think of situations prone to elicit very visceral responses, which makes for a very profound viewing experience. To further illustrate my point, Herzog’s earlier effort, Fata Morgana, is often considered a companion piece to this film mainly because it recontextualizes vistas of the Sahara desert as landscapes of some dying planet. But while decontextualizing images of the desert is an interesting exercise, it is not nearly as impactful as doing the same with scenes of a conflict as significant as the gulf-war. Lessons of Darkness aims to spark a genuine shift in the mind of its viewers, not by resorting to propaganda but by challenging the myopic views with which people usually address these situations.

The rest of the film continues taking poetic licenses in the vein of the opening quote. However, not all these touches directly contradict the facts, showing how Herzog is more than just a contrarian. Being at odds with the “real” world is merely an occasional, secondary effect of his attempt to communicate something more profound than most CNN coverage, not a focus on itself. For example, although the title of one of the film’s chapters likens the fields’ heavy machinery to dinosaurs, and although Herzog’s narration often anthropomorphizes oil as an evil entity, the audience will know not to take these figures of speech literally. In contrast to the film’s epigraph, these artistic choices are not meant to fool the audience, but suggest new ways of perceiving these images.

Lessons Of Darkness ultimately works not because of the viewpoints it provides, but because it provides them. At the beginning of this essay, I mentioned how Herzog prefers to create his own reality to deliver insight. Still, the fact is that, in Lessons Of Darkness, this creation, or reframing of reality, becomes the insight that is being delivered. The film is the best justification a saying like “art for art’s sake” could have because, in this case, the expression does not imply art does not need to communicate anything. Instead, it argues for how an artwork’s artifice itself, the way it diverges and sticks with mundane reality, is the “underlying” message. The film is a platform for the audience to explore ideas, as it refuses to push some sort of agenda while also avoiding becoming a blank slate.

Although Werner Herzog’s Lessons Of Darkness is usually referred to as a documentary, this label fails to do it justice. A more accurate description would be “mood film,” but even this falls short of addressing the more conceptual aspects of the work. In a way, its form mirrors the unconventionality of its themes. Not only does Herzog challenge the ideas usually associated with the subject matter, but also the ideas associated with its medium. It is thus a truly experimental work, where the experimentation is neither purposeless nor overboard. As such, it deserves a place alongside the more celebrated entries in the filmmaker’s oeuvre.

If you enjoyed this review of Werner Herzog’s Lessons of Darkness, consider supporting us and get patron-only content on our Patreon page. This will help the growth of this site, the automachination YouTube channel, and the ArtiFact Podcast. Recent episodes include a breakdown of Elizabeth Barrett Browning’s Aurora Leigh, a dissection of Kurt Vonnegut’s classic novel, Galapagos, and a long discussion of photography from Alfred Stieglitz to Fan Ho and Vivian Maier.