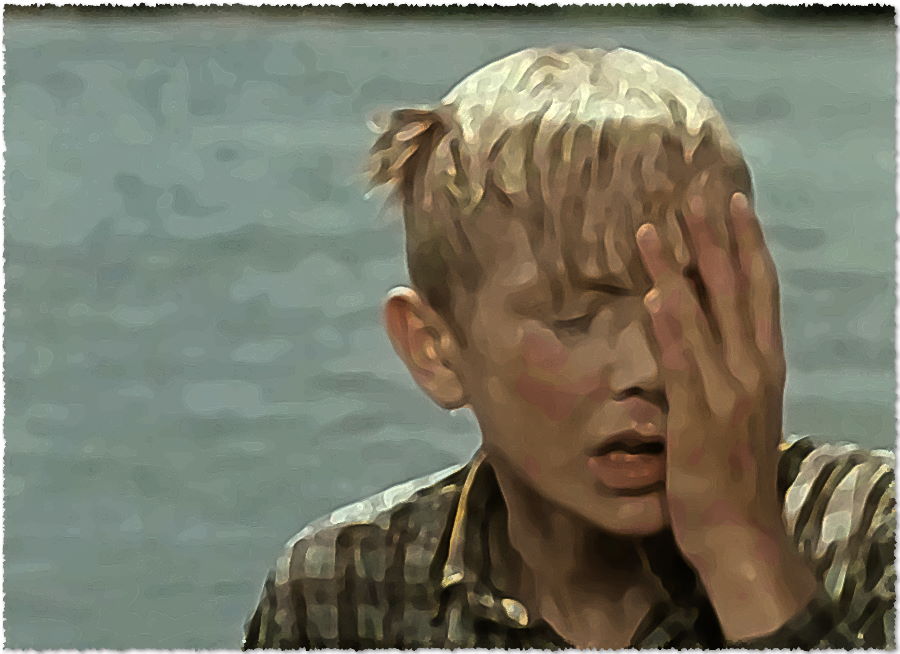 There are many ways which narrative can thrive within storytelling. This sometimes can pose difficulty for certain American audiences who have been brought up on the Hollywood kind—plot first and character later. Thus, anything that falls outside this realm is labeled ‘boring’ or ‘slow-moving’. (Just think back to when Terrence Malick released The Tree of Life. The movie theatre I attended had to include a sign explaining to audiences that this was the work of an ‘auteur’, as a means of preventing walkouts.) Forget Tarkovsky or Antonioni. These are, in fact, filmmakers that one needs to work up to in order to appreciate. It also requires an open mind, but that is another essay.

Karel Zemen’s Journey to the Beginning of Time is a Czech film that explores the wonderment of childhood through observation. Four young boys decide that they want to witness the world back in its prehistoric days, and so they take their logbook and their canoe wherein they quickly find themselves among floating chunks of ice amid the Ice Age. They spot a slew of creatures and even find a trilobite. Immediately, I was reminded of my own childhood wherein I set out one day to find ‘fossils.’ (I didn’t find shit.) But how fun would be if I had? The film uses almost cartoon-like imagery and puppetry, which adds to the childlike excitement and mystery. This is a children’s film and a highly intelligent one, at that.

So what of the narrative, then? Much occurs via observation—we are along for the ride. In fact, I can think of no other idiom to better describe this film. The boys adhere to their logbook, they bicker, they bond. Creatures appear and disappear and we are able to uncover both the era in which they enter as well as the species, thanks to their logbook. (Bison, mammoths, brontosaurus and flamingos are among some.) A paleontologist was hired for guidance and so the detailed accuracy is important, as the audience will come to trust the film’s expertise. Dream-like and fictional, the surrounds successfully appear as artifice and Karel Zemen makes this work. We become part of their imagined world.

Journey to the Beginning of Time, despite moments of chasing and their canoe breaking and their near freezing during the Ice Age, is a very peaceful experience. The comfort that fills one upon viewership is not one often sought. Perhaps comfort is a subjective thing but this is the epitome of a ‘feel-good film’ without the excessive bathos and sentimentality. By the film’s end, the boys locate another trilobite wherein they are held side by side. ‘500 million years apart,’ one says. Then we see the ocean, which keeps rolling onward and will continue to do so, just as it did thousands and thousands of years ago. (Moby-Dick anyone?)

There is something about time that is comforting. Time is indifferent. It is the one lone thing that will always be. It eliminates mediocrity. And that which surrounds it must surrender to it. There is no escape. Compared to the rest of the world, humans are rather late to the game. Moreover, on the same day that I watched Journey to the Beginning of Time, I also watched Ray Harryhausen’s Jason and the Argonauts (1963). Two things about this film struck me. Firstly, the narrative is quite different, as we have many events occurring in a small span of time. We know what to look for and who the bad guys are. The film also includes a kind of artifice in terms of its direction, which is part of its charm. Skeletons come to life and Neptune appears out from the water while Zeus and Hera watch from an above pool, located somewhere in the sky. We get what we get—there is no pretension.

Neither film would work if it employed more ‘realistic’ imagery, which Karel Zemen seems to intuitively understand. The fact that both operate out of a sort of artifice adds to the imaginative quality, where with one film we are accessing a child’s mind and with the other we are accessing a myth. These are both pretend worlds, and it is through this world of pretend where we can then embrace new forms of storytelling. Our minds become more malleable and more willing to appreciate creativity and inventiveness. And that there are so many ways with which to tell a story that to not explore them seems stifling. Especially if one is an artist.

As example, one of the many contrasts I noticed upon entering adulthood was that I stopped beginning my sentences with ‘pretend.’ This, of course, is not to imply that fantasies don’t take place, but I recall my friend and me telling ghost stories, exploring our backyards and ultimately ‘pretending’ to be something or to be somewhere we were not. At one moment within the film, one of the boys drops the logbook within the murky water and is then forced to shoo away a reptile-type thing. (The species name is not given.) The boy calls it ugly, but I found it rather cute—this green creature making its presence known to this invasive human. After all, who was there first? And might the reptile in fact find the human every bit as ugly?

Journey to the Beginning of Time is just that—a journey. The adventure resides within the observation, as the film’s message is the journey itself—this trek backwards into time and timelessness. A surrendering into that place of pretend. Gone are the harsh elements of nature. If only travel could be this easy. Viewers should note, however, that there are two versions to this film—the original, which is filmed in Czech, and an American version with dubbed English. I watched the Czech version and it is the more intelligent rendering and the one I recommend.

Along with Jean-Jacques Annaud’s 1988 film The Bear, (told from the perspective of a bear within the wild) Karel Zemen’s Journey to the Beginning of Time is one of the best children’s films ever made. Films like these are so good, in fact, that they transcend being a mere ‘children’s film’ as they rank among the classics. This is yet another indicator of the power of observational narrative and the beauty that arises from the creative. Time simply doesn’t get more authentic than this.

If you enjoyed this review of Karel Zemen’s Journey to the Beginning of Time, check out the automachination YouTube channel and the ArtiFact Podcast. Recent episodes include a dissection of Kurt Vonnegut’s classic novel, Galapagos, a philosophical look at kitsch, aesthetics, and NFTs with UK painter Ethan Pinch, and a long discussion of photography from Alfred Stieglitz to Fan Ho and Vivian Maier.