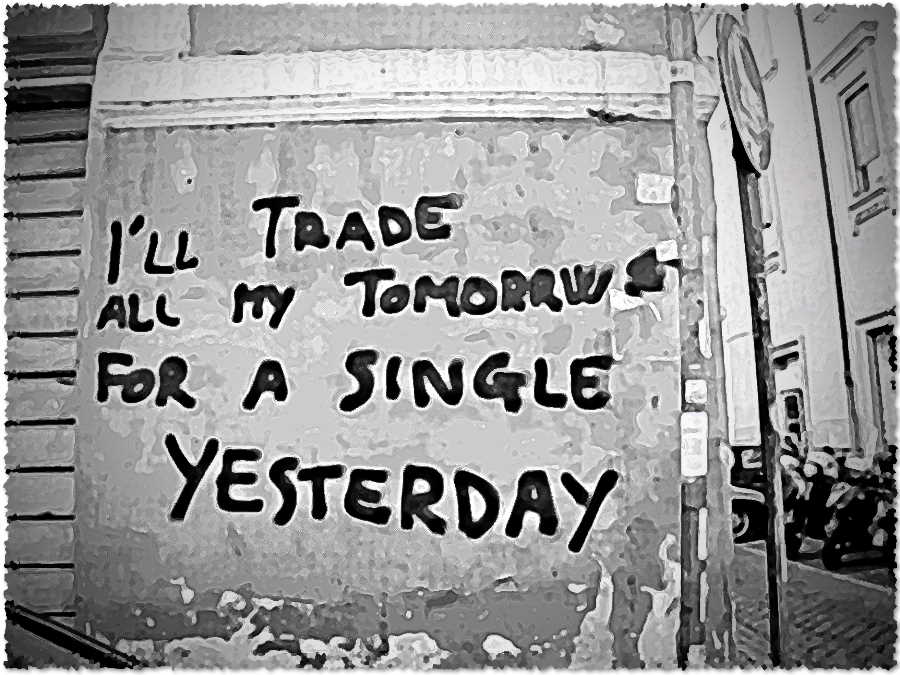 Any good Zen Buddhist will tell you that “mindfulness” is the key to a healthy, peaceful,  mellow life. Being in the moment means claiming and expanding the present moment instead of reaching back to the past to learn lessons and then projecting into a hypothetical future to apply those lessons. It is an interesting, if difficult, thing to contemplate—let alone accomplish, but it leaves no room some important human (all too human) characteristics: daydreaming, memories—nostalgia.

The definition and significance of nostalgia have changed since the original Greek roots of “homecoming” and “pain.” For centuries, it was considered a debilitating and potentially fatal medical condition expressing extreme homesickness. But the modern view (there is always “the modern view”) is that nostalgia is a good thing, for it provides important psychological functions, such as to improve mood, increase social connectedness, enhance self-regard, and provide existential awareness. There are numerous studies which attest to the benefits of nostalgia, but I would prefer to spend a moment on apricots.

Younger readers may not have ever SEEN an apricot. Pity. At their ripest, juiciest, best, their golden-orange skin sporting a slight fuzz, an apricot is a true visual delight. When I was a wee lad, I worked picking ‘cots, at fifty cents a bucket, switching off some days to work with the older women, whose expert hands sliced the fruit, popped out the pit, and spread the halves on a large rack—all with the swiftest, surest, smoothest motion with their curved knives, and all while chatting and laughing amongst themselves. They tolerated my fumbling attempts to get one row of halves laid out while they had seven or eight done. And those apricot pies! Where are they now? Look as hard as you like, but with few apricot trees left, no orchards to be seen, apricot pies are as rare as civility and critical thought are in politics. Apricots still show up in jam, but that is mighty thin gruel to a man who, as a callow youth, laid for hours in the bough of a monster apricot tree in the middle of an orchard of such trees, inhaling the scent of dozens of trees full to bursting with ripe apricots, eating ‘cots one after the other and day dreaming.

Not all nostalgia is benign. In 1792, Mary Wollstonecraft (NOT to be confused with her English novelist daughter who wrote Frankenstein, or The Modern Prometheus, Mary Wollstonecraft Shelly) published her treatise, A Vindication of the Rights of Woman, in which she argues that women are not naturally inferior to men, but appear so only because they lack education, and suggests men and women should be treated as rational beings, living in a society based on Reason. Many men still believe that was a death knell and long for days when women were kitchen and boudoir-bound, didn’t vote and allowed the patriarchy free rein. This sort of nostalgia inhibits progress, choking off the talents and contributions of half of humanity, and badly tarnishes the gold of nostalgic reminiscences. Neo-Nazis have nostalgia; Hillary Clinton has fantasy-nostalgia for a time she ALMOST lived in; and it seems our entire culture is drenched in a longing for the Good Old Days, with memes and oldies songs played as background music for commercials, and…well it’s as though the entire Western world longs—not so much for the past—but for someplace else but here, some time other than  now, a time and place When Things Were Better, when Things Were What I Remember.

In March of this year, CNN reported on the pain-ameliorating properties of nostalgia, citing a Chinese Academy of Sciences and Liaoning Normal University study. Participants were asked to rate their level of pain from heat stimulation while looking at nostalgic pictures—old cartoons, childhood games, or retro candy—compared with more modern pictures. An RI machine scanned the 34 patients. It was found that images which triggered childhood memories were correlated with patients reporting weaker feelings of pain. Well…only 34 folks, but still…

So there you have it: nostalgia is good for what ails you, but notice there  is no mention of the dark side of it. The dark side being an intense longing to “go back to better times” and to ignore, resist, become inured to, the modern world—and worse. Intense feelings of “homesickness,” deep longing for a return to a putative better time can (and does) lead to a violent wrenching of the Self and such violence spills out and dirties the society. Even those people who have 25 years of food stashed away in a cave in Montana, waiting for a return to the Golden Days, feel the curative and healing effects of their nostalgia—dark and twisted though it may be.

So, mostly, nostalgia is harmless—good, even. But what of a society which in a constant, pained, fever of nostalgia? A society which longs for what was, even though “what was” might be an invented story, a myth? Such a society would make some serious political and social errors; such a society would tear at its own fabric, render asunder the union which it pretends to be, a unified polis moving into the future. And there is, will always be, backlash: names will be called, punitive action will be taken against reactionary forces, rights will be violated, a certain miasma of lawlessness will be loosed upon the land. And there will be nowhere to hide. Ask that Zen  practitioner if THAT is the moment she wants to be in.

If you enjoyed this interpretation of nostalgia, consider supporting us and get patron-only content on our Patreon page. This will help the growth of this site, the automachination YouTube channel, and the ArtiFact Podcast. Recent episodes include a comparison between Thomas Pynchon’s Gravity’s Rainbow and Kurt Vonnegut’s Slaughterhouse-Five, a survey of photography from Josef Sudek to Laura Makabresku, and a discussion of Hermann Hesse’s classic novel, Steppenwolf.

More from Len Holman: Brain Chips & Elon Musk, Are Ideas Going Instinct?,  The Ghost in the Machine: From Havana (Syndrome), With Love