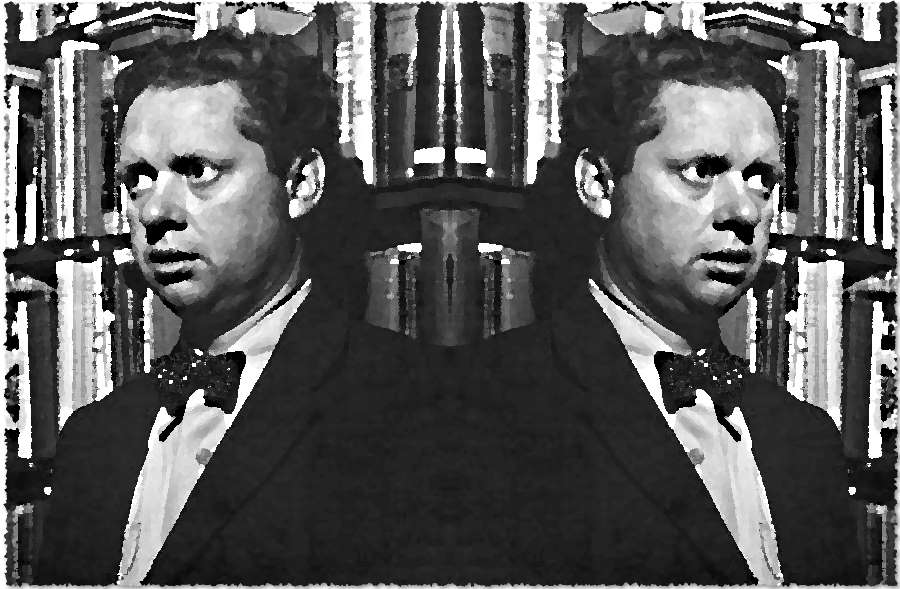 Dylan Thomas might not be a great poet, but he’s a good one, and definitely one of the most famous. He is also a very compelling orator of poetry, as he possessed a marvelous talent for emotive delivery. Before he withered from addiction, he was famed for his speaking tours during which he recited his own poems and those of others – many of which can be found online today. They are wonderful recordings and I encourage the reader to check them out, for they (in addition to being pleasurable listens) clue one into the sort of poet he was/is, and how that particular style reaps certain benefits and downfalls.

Thomas had a number of good/excellent poems, although the one that immediately comes to mind likely isn’t one of them (rage against it all you want, fanboys/girls). I’d argue some of his best are: “Among Those Killed In The Dawn Raid Was A Man Aged A Hundred…”, “The Refusal to Mourn the Death, by Fire, of a Child in London” “Deaths & Entrances,” “Love In The Asylum,” and perhaps a few others. His longer poems aren’t terrible, either – just way too long.

Take, for example, “Fern Hill.” It’s another good Thomas poem, and is, along with “Dawn Raid”, one of my favorites, but the prolixity drags its potential down. This is one of the previously mentioned downfalls of his verbose, nigh-bardic style, as it tends to be self-indulgent, and repetitive simply for the sake of rhythm and music. It makes for an entertaining recitation, but on the page? And yet, this is something which must be considered in any analysis of Dylan Thomas’s poetry.

Let’s get the pluses out of the way, first. The music in “Fern Hill” is wonderful; this is easy to take for granted, in Thomas, but his sheer lyrical gifts were often just enough to save his weaker poems from the garbage dump. From my reading (and admittedly, I did not subject the poem to hardcore scansion – not that it matters all that much, anyway) there is no strict rhyme scheme, so the bulk of its music comes from internal rhymes, and the singing, bouncy quality of his verse. It is littered with nice enough lines: “in the heydays of his eyes”, “As I rode to sleep the owls were bearing the farm away”, “My wishes raced through the house high hay / And nothing I cared, at my sky blue trades”, etc. Dylan Thomas’s turn-of-phrase could be truly unique, forcing a reader into making a connection he/she would not normally have to, in a lesser poem. The last two lines are powerful (if a tad mawkish) and count among my personal favorite endings in all of poetry. They also provide a counterpoint to the poem’s litany of praises – a sense of fatal captivity rounds out the yawping Pollyanna, which is a smart choice…

…since the bulk of the poem is laboriously excessive, and for every unique phrase he includes, Dylan Thomas lapses into cliché elsewhere, and more often. Descriptions repeat endlessly (“green” and “golden” are common culprits) and enveloping “Fern Hill” is a triteness of idea: the Edenic vision of the speaker’s memories are bought into almost completely – save for the finale – without any refractions/complications that might paint a more complex picture. This is one of the many times Thomas lets himself be subsumed by the sound-sense of his poetry, thus sacrificing depth for aesthetics. It is a good, even beautiful, poem, but mostly one-dimensional and overlong.

My other favorite Thomas poem, thankfully, is not as long, and packs a more powerful punch due to its brevity/closer attention to detail:

When the morning was waking over the war
He put on his clothes and stepped out and he died,
The locks yawned loose and a blast blew them wide,
He dropped where he loved on the burst pavement stone
And the funeral grains of the slaughtered floor.
Tell his street on its back he stopped a sun
And the craters of his eyes grew springshoots and fire
When all the keys shot from the locks, and rang.
Dig no more for the chains of his grey-haired heart.
The heavenly ambulance drawn from a wound
Assembling waits for the spade’s ring on the cage.
O keep his bones away from the common cart,
The morning is flying on the wings of his age
And a hundred storks perch on the sun’s right hand.

Brevity, and the structural limitations of a sonnet, disallows Dylan Thomas’s flaws (prolixity, monotony, sappiness) from overwhelming the poem. Whereas “Fern Hill” is beautiful but rather quaint in idea and phrasing, “Dawn Raid” is darker, and odder, as well, thus injecting its triumphal strains with a tinge of ambiguity. The music, in this poem, is just as good (and kept from being too singsongy, what with all the slant rhymes) and does not take precedence over the “moment” described.

Understatement is utilized to great effect, here, especially with the second line. “He dropped where he loved” is good, as is “Tell the street on its back” and “funeral grains of the slaughtered floor.” These depict destruction far more effectively – i.e. poetically – than if he were to go on and on about the clutter of debris, bloodied corpses, etc. Writing “the slaughtered floor” better illustrates the scene’s horror through its compression; this technique also saves “Dawn Raid” some much needed space in the already tight strictures of a sonnet.

In addition, the title provides useful context for Dylan Thomas’s approach to the man’s death. It has the feel of a newspaper clipping, the matter-of-factness of which plays well against Thomas’s lyrical bent. The shortened title saves typing but is more boring. (Thomas’s titles, in general, are boring, and often are just the first lines of his poem – better poets utilize titles as part of the poem’s function).

A potentially interesting component of “Dawn Raid” is the line break between Lines 10 and 11. The more obvious reading is that the “heavenly ambulance” is drawn by a “wound,” i.e. injury, as terrestrial ambulances are. The following “Assembling” in Line 11, however, makes me think of a clock-like mechanism – a wound-up assembling, as it were – that is drawn to the death, as if it were an automated response. I see this as (again, potentially) connected to the very last lines.

The poem’s end rings transcendently. It’s somewhat puzzling, too, with the final line – a stork for every year – resembling a picture out of some koan. It is not outright celebratory; Dylan Thomas lets the imagery, and whatever emotion it conjures, speak for itself. “The sun’s right hand” (like a clock’s) might have some bearing on the line break discussed above – as if the natural world is justly prepared for such an end as this man’s. This could be a big stretch, but I like that this interpretation exists, and it wouldn’t otherwise if Thomas had not phrased things so. In any case, the ending works well, for its open-endedness is complementary to the preceding descriptions of all those “chains” and “locks” flying apart. There are less interesting moments, to be sure – I mean, is “grey-haired heart” such a necessary addition? Nevertheless, it’s a good poem, and shows the Welshman’s adroitness when he went for something deeper under the flow of mere lyricism.

I won’t argue against those who claim that Dylan Thomas’s reputation as a showman, an alcoholic Skald-of-sorts, outstrips his actual poetic legacy. I doubt the bulk of his oeuvre will survive time’s stress-testing, but hey, this applies to most artists, and isn’t a knock against what superbness he was capable of. If a novice poet is in need of some ear-training, his poems aren’t a bad start, and are memorization-friendly, to boot. Doing this might prove an even better effort at preservation than a lone, recorded voice bellowing out the past.

More from Ezekiel Yu: When Everything Was Cresting: On Wallace Stegner’s “Recapitulation”, Where David Lowery’s “The Green Knight” (2021) Fails, Crisis of Success: On Terrence Malick’s “Knight of Cups” (2015)